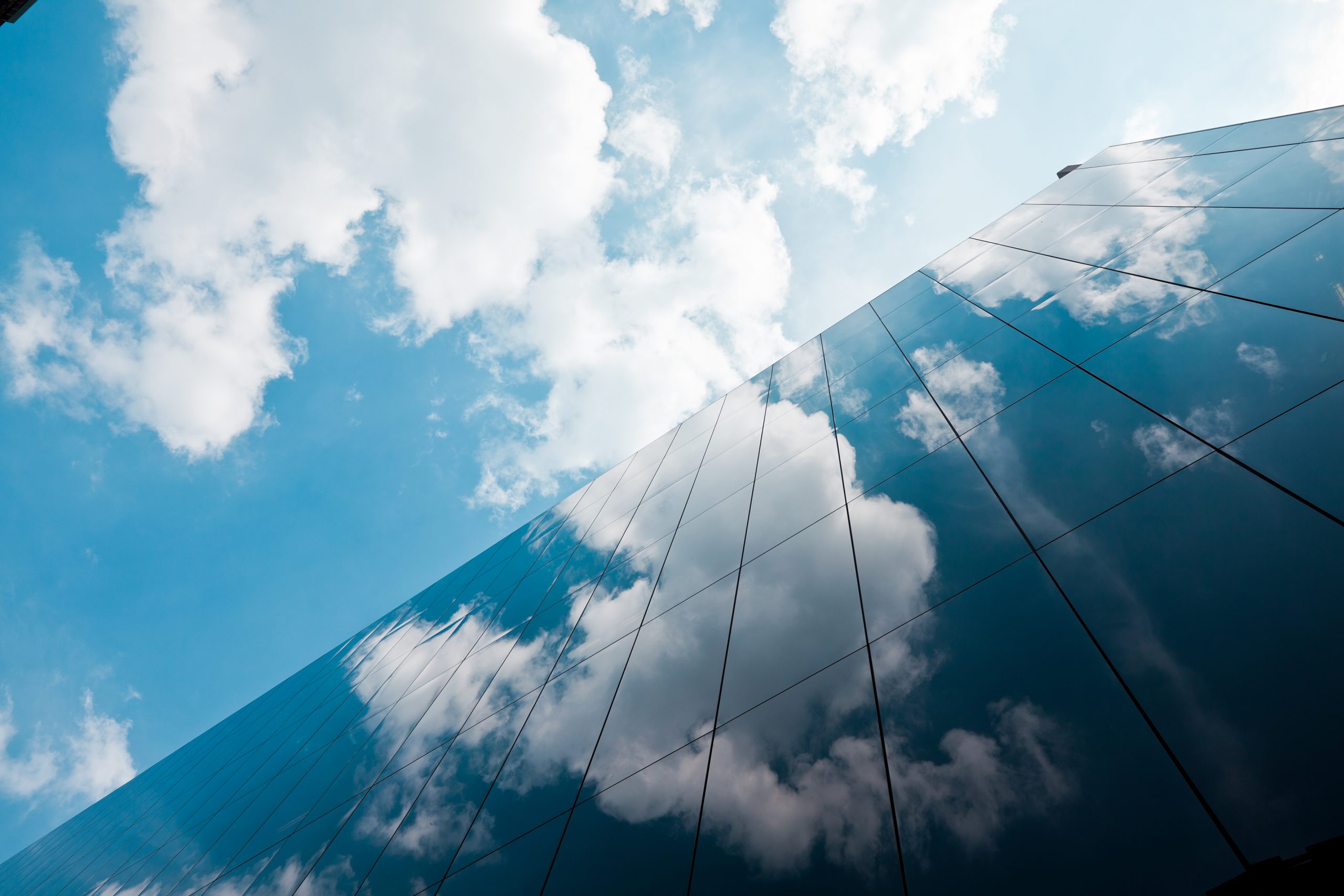 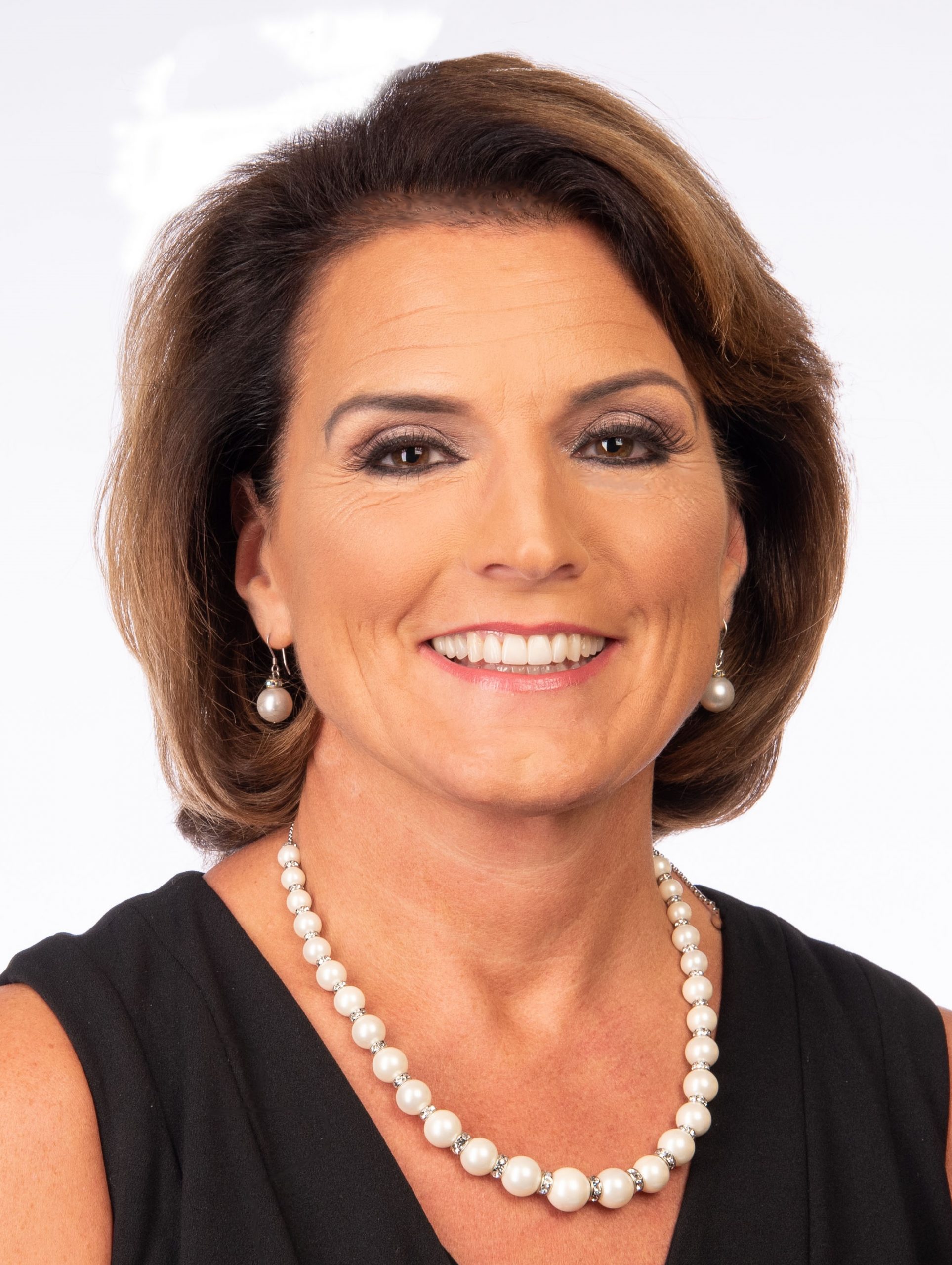 Many financial institutions reacted quickly in March 2020 to bolster credit loss reserves and incorporate anticipated near-term and longer-term impacts of the COVID-19 pandemic on loss reserve estimates. This came on the heels of adopting one of the most significant accounting changes for financial institutions in decades, the Current Expected Credit Losses (CECL) accounting standard. The CECL standard, which fundamentally changed the way financial services organizations calculated loss reserves, took effect for large public filer institutions on January 1, 2020, while smaller financial organizations and private institutions were granted an extension until January 1, 2023 due to the complexity of the CECL transition and the cumulative resource burden of multiple accounting changes.

The financial impact of CECL adoption on the Allowance for Credit Losses (ACL) estimates was driven by the fact that under CECL, banks needed to incorporate expected credit losses over the full expected life of the loan portfolios and also consider forecasts of expected future economic conditions. To fully appreciate the impact, consider what happened to CECL reserve levels in 2020. The table below presents relevant quarterly and annual data for five of the largest U.S. banks as a representative data set to analyze CECL reserving trends over the last year, from the time of CECL adoption at the beginning of 2020 to the December 31, 2020 year-end reporting date. 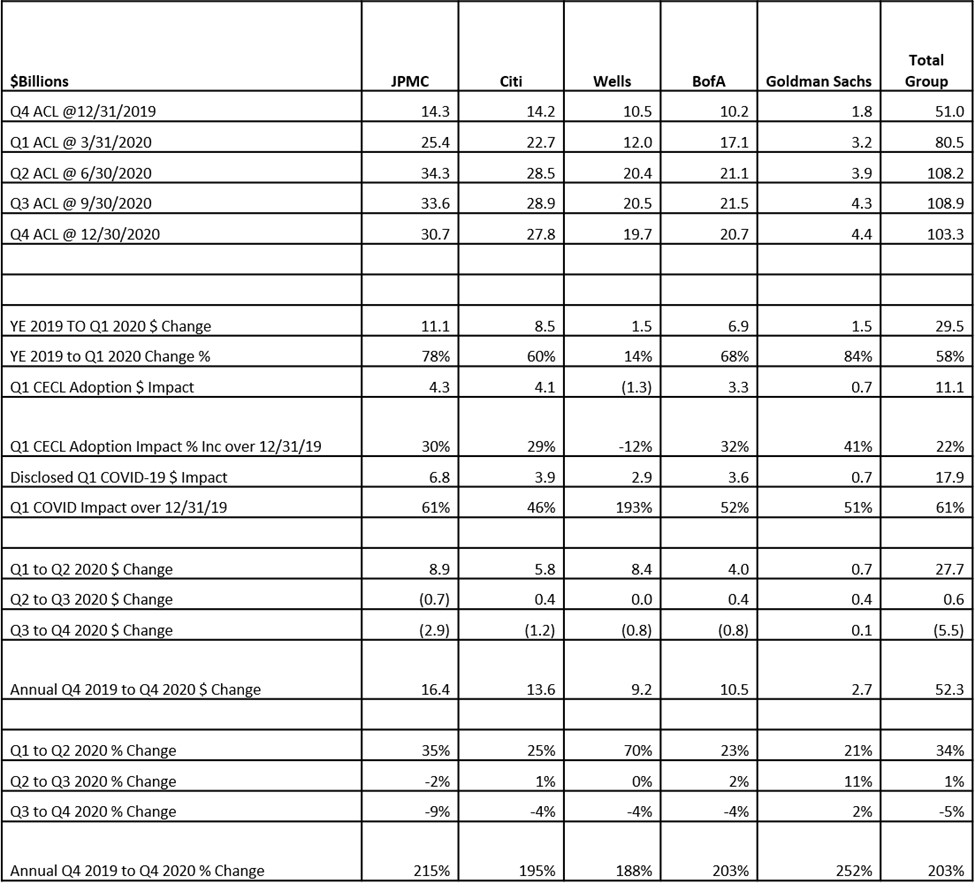 The initial impact of the pandemic on the ACL in the first quarter of 2020 also resulted in an $17.9 billion ACL increase across the bank group, with individual bank increases nearly equal to, and in some cases greater than, the CECL adoption impact for each bank.

The total ACL across the bank group increased from $51 billion as of December 31, 2019 to $80.5 billion as of March 31, 2020, an average increase of 58% due to the combined effect of CECL adoption and first-quarter 2020 pandemic impact. This dramatic increase reflected the high degree of uncertainty surrounding the pandemic, which was incorporated into the underlying CECL reserve forecasts to account for the unknown severity and length of the associated economic downturn conditions at that time.

Further dramatic increases in ACL levels occurred by the end of the second quarter of 2020, with the total ACL across the bank group increasing from $80.5 billion to $108.2 billion, a 34% quarter-over-quarter increase. Individual bank ACL increases ranged from 21% to 70% for the quarter.  The continued buildup in the second-quarter reserves reflected the loss of 22 million jobs from February to April 2020, as U.S. unemployment soared to a record level of 14.8% in April 2020 and GDP declined over the first and second quarter (-5.1% in Q1 2020 and -31.4% in Q2 2020).

Third-quarter 2020 reserve levels stabilized to a great degree as the economy rebounded with a 33.4% increase in quarterly GDP and unemployment rates began to fall, declining to 6.7% by December 2020. Although the economy was showing signs of recovery from the sharp declines in previous quarters, the ongoing impact of the COVID-19 pandemic continued to create uncertainty, with many harder hit sectors (e.g., commercial real estate, oil and gas, leisure and hospitality, among others) continuing to struggle and regional unemployment levels varying significantly.

The fourth quarter of 2020 showed a modest decrease in ACL levels across the bank group, reflecting a $5.5 billion (5%) decrease in ACL with four of the five banks in the group posting modest declines in the ACL. While ACL levels as of December 31, 2020 were still over double the level at December 31, 2019 for the bank group, the stabilization and modest decline in reserve levels over the last two quarters of 2020, respectively, reflected several factors. including underlying credit portfolios performing better than expected, realized economic relief from government fiscal stimulus packages, and prospects of economic recovery appearing more likely with the approval of new vaccines in December 2020.

A key metric in assessing reserve levels and trends over time is the ACL coverage ratio (ACL/Total Loans). As seen in the chart below, the ACL coverage ratio at December 31, 2019 was relatively low at 1.4% average for the bank group, consistent with U.S. banking sector historical averages at the end of a long expansion period after the last recession.

Banks are optimistic heading into the first-quarter 2021 financial statement reporting period, buoyed by the momentum created by the recent additional economic stimulus of the Biden administration, an ongoing trend of lower-than-anticipated deterioration in credit portfolio performance metrics, lower year-over-year loan growth for many banks, and a potential for reopening of the economy which seems possible with the vaccine rollout. While there are still weaknesses to overcome stemming from the pandemic, with several industry segments and geographical areas still underperforming the overall economy, the current ACL levels may be sufficient to absorb expected losses. Continued scrutiny on loan deferral portfolios and portfolios in distressed industries will be needed to develop CECL forecasts and assess CECL reserve adequacy going forward.